A Diverse Look at Brand Archetypes

In all forms of storytelling characters are fundamental. They can be a person, object or even an idea. Regardless, they serve a necessary purpose of moving the plot from point A to point B and help whoever’s interacting with the story relate and connect.

Over time, it was decided by the famous psychiatrist Carl Jung that every character in a story could be broken down into one of 12 different archetypes. However, despite the billions of stories that have been told and forgotten from every corner of the world throughout human existence, only a fraction of characters seem to be used as regular reference points to explain archetypes.

This lack of diversity in storytelling calls for a reminder of just how different characters and archetypes can look, even when they’re all boiled down to one of a handful of selections.

To further drive this point home and offer any curious minds a source to pull from—and help put an end to the excuse of “I couldn’t find any”—here’s a list of diverse characters that fall into each of the 12 storytelling archetypes.

Often confused with being naive, the Innocent is someone who chooses to live their life on the straight and narrow path as a means to get to whatever their version of peace and happiness may be. They’re far more likely to see the best in those around them and be willing to give a second chance when no one else would. They often display happiness and optimism when it should be difficult to do so and give the impression that they’ll be young forever.

Examples of notable characters who fall into the Innocent archetype would be Aang from Avatar: The Last Airbender, Diana Ross’ Dorothy in The Wiz and Prim from The Hunger Games series.

The Everyman/woman archetype is reserved for characters who are generally relatable to most people and are largely motivated by a sense of belonging. In some stories, this designation may be given because they’re a protagonist with a blank slate who was suddenly dropped into a very different world. This gives the audience someone to latch onto. In other instances, they may even be a background character who stands out because we see a little of ourselves in them.

Examples of the Everyman/woman archetype would be Will Smith’s Agent J in Men in Black, Lilo from Disney’s Lilo and Stitch and Daniel Kaluuya’s Chris in Get Out.

Perhaps the most commonly used archetype is that of the Hero. In fact, it’s so common that it can be broken down even further into various types of sub-categories. But one thing they all share is a determination to improve their world by overcoming any obstacle that stands in their way, whether it be an army, an internal struggle or something symbolic. They also often have the added benefit of some life-changing event, ability or birthright pushing them along in their mission that makes them stand out as “special” by nature compared to their peers.
Among the many, many examples of characters who fall into the Hero archetype, you can point to Celie in The Color Purple, Daisy Ridley’s Rey from Star Wars and Shadow in American Gods.

The archetype of Outlaw or Rebel is reserved for those who are determined to move to the beat of their own drum, even when it’s playing a beat that no one else can hear. When everyone around them is telling them what to do, they almost take it as a foregone conclusion that they should do the opposite to assert their independence. This isn’t always an intentional decision to act out, though. Sometimes they simply see the world differently than everyone else and operate accordingly.

Examples of famous Rebel characters who jump to mind would be Denzel Washington as Malcolm X, Korra from Avatar: The Legend of Korra and Alana in the Saga graphic novel.

Characters who fall into the Explorer archetype value their freedom and ability to come and go as they please more than almost anything else. They’ll settle down from time to time, but never long enough to put down roots and risk feeling stuck. Or perhaps they’ve spent a significant amount of time confined to a certain way of life and have a strong desire to see the rest of the world for themselves

Carmen Sandiego, Mulan and Eddie Murphy as Prince Akeem in Coming to America are all examples of characters who fall well into the Explorer archetype.

While it’s safe to say that everyone is capable of creating, being designated as a Creator is something entirely different.

A character who falls into the Creator archetype excels at creating things out of nothing simply as a means to examine and test the limits of the world around them. This could be done by building inventions or creating masterpieces of art. They’re constantly looking to improve upon what already exists, which can easily turn into an obsession if not kept in check.

Shuri from Marvel’s Black Panther, Salma Hayek as Frida Kahlo and Prince as The Kid in Purple Rain fit directly into this archetype.

Often used as a supporting character or obstacle to overcome, someone under the Ruler archetype looks over the world around them with a sense of control or leadership. When their job is done well, they bring order where chaos would normally take hold.

To be honest, Rulers are often weakened or completely taken off of the game board at some point as a plot device because they usually bring a feeling of peace and authority to every situation they’re in, which can ultimately make them a crutch for the main character to become overly reliant on.

Mufasa, Dean Fogg in The Magicians and Olivia Pope in Scandal are all rulers who had their reigns tested or even ended after they once had solid control over their respective domains.

As the name would suggest, members of the Magician archetype have an innate ability to see and tap into the supernatural happenings in the world around them that other characters are unable to.

Even in stories where everyone is able to tap into magic, the Magician archetype is reserved for the select few who almost live on another plane of existence altogether. However, it’s not uncommon for these characters to be fearful of their own power or what they would do if they gave in to their own desires and are restricted by this fear.

Examples of the Magician archetype are Bonnie from The Vampire Diaries, Storm and Oscar Isaac as Nathan in Ex Machina.

The Lover archetype can absolutely include characters who are hopeless romantics and in constant pursuit of love. However, the designation actually applies to anyone who is motivated by having impactful relationships, including any with family, friends and anyone in between. Not only do they crave intimacy and a strong bond with others, but they also inspire others to look for the same.

One of the biggest flaws that is often found in this archetype is that these kinds of characters hate being alone and can become nearly obsessive over finding a long-term connection of substance, which begs the question of do they love the people they need or do they need the people they love?

Jamal Malik from Slumdog Millionaire is a perfect example of someone who falls into this archetype, along with Marcus Graham in Boomerang and Aladdin.

Characters who can be labeled as Caregivers find fulfillment in making sure the needs of those around them are constantly met—even at the cost of their own satisfaction and comfort. The dark side of being a Caregiver can also turn characters bitter after their investment into others isn’t reciprocated or they can become overbearing and controlling when they try and do too much for those they care for.

Examples of Caretakers would be Idris Elba in Daddy’s Little Girls, Eleanor Sung-Young in Crazy Rich Asians and Katara in Avatar: The Last Airbender.

Being a Jester doesn’t mean a character is necessarily funny. As a matter of fact, they may not be funny at all. But their intention is to use humor to enjoy their ride on this crazy thing called life. The obvious drawback is that this can quickly become annoying to those around them, but that’s expected. The serious concern is when they’re willing to bring chaos into the mix simply for a laugh at someone else’s expense.

Winston Bishop from New Girl, Miles Morales as Spider-Man and Ken Jeong as Chang in Community would all fall under this category.

At first glance, you may think that the archetype of Sage is reserved for characters with years of wisdom at their disposal. On the contrary, it applies to anyone whose strongest motivation is to find out the truth. It just so happens that a lot of wisdom is a byproduct of this pursuit.

This could easily be used to categorize philosophers, detectives, lawyers, superheroes and pretty much anyone who uses deductive, analytical reasoning to come to a conclusion in a story.

Morpheus from The Matrix and Uncle Iroh from Avatar: The Last Airbender definitely qualify here. As a matter of fact, so does The Oracle from The Matrix. 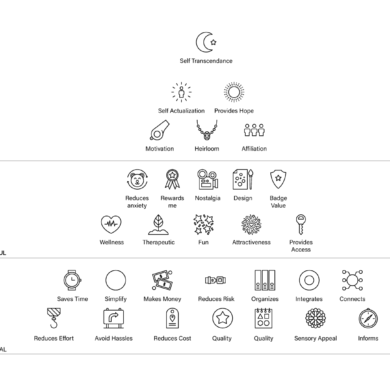 How Purpose-driven Marketing Provides Value or How to Implement Stakeholder community management strategies.