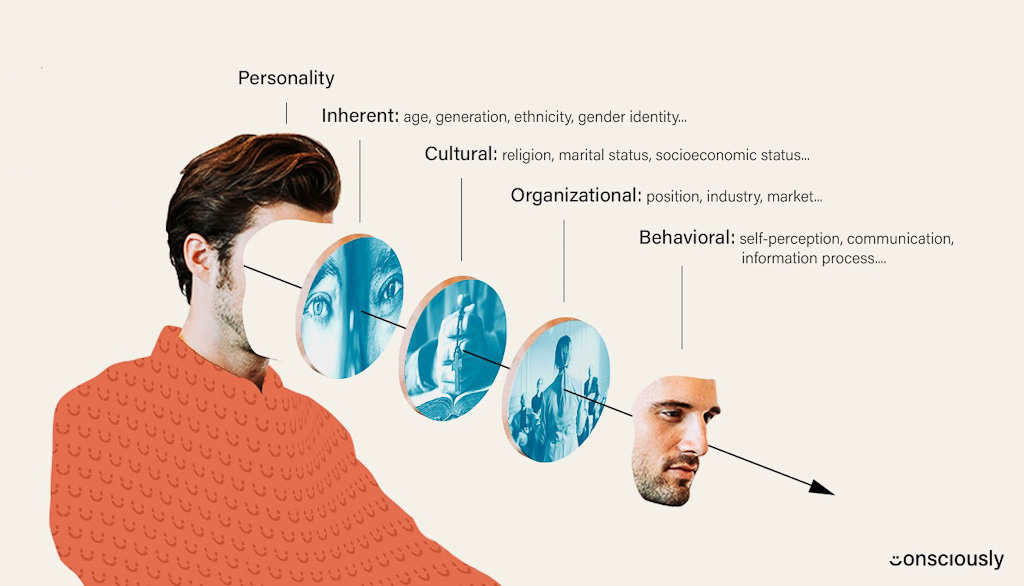 The main groupings of blind spots can be described as unconscious judgements based on: personality, visible characteristics, culture, organizational structure, and behavior.

Types IN people, instead of types OF people, is fundamentally important and relevant to unconscious bias. Personality models that speak to types OF people inherently invite “othering,” entitlement, and prejudice. The Process Communication Model (PCM), describes six types IN each of us, each with its own preferred way of seeing the world. Because we all have all six types IN us, there is no other. We are all connected, and all have within us the capacity to appreciate and connect with any other type.

Six Types of Personality and The Associated Unconscious Bias

These types of blind spots include race, gender, ethnicity, age / generation, sexual orientation, gender identity, physical ability and gender expression. They are generally “in your face,” in that you can clearly see the color of someone’s skin, how old they are, whether they are male and female, etc.

Let’s take these each in turn. Do you recognize yourself, an employee or a vendor? Because some of these terms can be confused with each other, it’s important to have clear definitions.

Cultural bias is the interpretation of any phenomena based on one’s own cultural standards. It also refers to the bias created due to the norms of the majority ethnic group.

It includes misconceptions, prejudices, or beliefs that we have toward other people, communities, or countries. Things like books, movies, travel, food, or lifestyle introduce us to the non-familiar aspects existing in the world outside. Cultural bias is just like viewing the ‘other’ with ‘our’ glasses on.

Organizations, just like individuals, have biases and blind spots. These biases become, unfortunately, an ingrained part of the company culture, and objective decisions become impossible for things like:

You’ve learned that there are conscious and unconscious blind spots. In order to correct our unconscious biases, we must be self aware, and aware of existing biases. Several different studies show that simply being more informed on biases reduces the extent they come into play in your life, so simply reading about it is a step toward reducing or eliminating your biases.

Being self-aware of our feelings and beliefs is key to understanding our biases — only then can we move toward honest social progress. This allows us to make more just, informed decisions and avoid decisions that result from blindly following implicit biases.

What are behavior blind spots when it comes to bias?

How we reach conclusions. Biases in how we think can be major obstacles in any decision-making process. As you’ve read here, biases distort and disrupt objective thought about an issue by bringing in influences to the decision-making process that are separate from the decision itself. In addition to finding your biases through the Harvard test mentioned above, learn to employ critical thinking.

How much we try to control. Yes, there’s such a thing as “control bias,” and it’s a self-directed bias. The illusion of control refers to the tendency for people to exaggerate their ability to produce a desired outcome. Even when it comes to controlling random events, people believe they have control.

Not everything in life is within our control. Believing that it is can be a serious handicap to getting things done in design work and most of life. Learning how to handle the illusion of control will make it much easier to accept things that aren’t within your control and focus your efforts on areas that do lay within your control.

While personal responsibility is vital, It’s important to recognize discrimination in the workplace, rather than feeling that you are completely responsible for how you are treated.

How we organize power. A study by Utah State University found that diversity is conducive to – even critical for – innovation and competitiveness. It discovered that women and minorities in corporate settings bring new and different perspectives, backgrounds, and information sources to bear on complex problem solving.

And it’s not just the person at the top. Diverse boards are associated with greater transparency and accountability, as well as more effective communication and more innovative solutions to problems. And, diversity among board members is associated with improved communication between CEOs and boards, which also results in improved firm reputation and more collaborative strategic planning.

The focus of minority CEOs and boards is different as well. They foster improved measures of strategy evaluation, more effective monitoring, higher levels of accountability, and a greater focus on non-financial performance outcomes.

And, minority executives tend to have different career trajectories compared to their White peers – they’re more likely to have non-business backgrounds and experience in areas like community affairs, human resources, and other support functions. These differences can mean that when they’re promoted to top positions, minority leaders bring a different knowledge base due to their exposure to different areas of practice. Significantly, minority leaders are more likely than White leaders to express strong support for responsible governance. In fact, minorities’ greater exposure to non-productive areas further strengthens their commitment to corporate social responsibility, fairness, and accountability – all characteristics of strong governance.

How we see time. Does race impact time perception? Like seeing and hearing, perceiving time is experienced by the individual as an objective reality since it is given no conscious attention – like any unconscious bias – and proceeds outside awareness and governs our movement and decisions.

It found that an interaction among a white person and a Black person is known to be arousing for the Black individuals as well and that for many Black Americans, these interactions introduce concerns about being the target of bias, or being treated in a stereotypical way. It also introduces stereotype threat, a form of arousal that emerges from fearing one may confirm the group stereotype through one’s actions in the encounter. Thus, black participants, indeed any individuals who may experience arousal in an interaction, should experience bias to time perception. 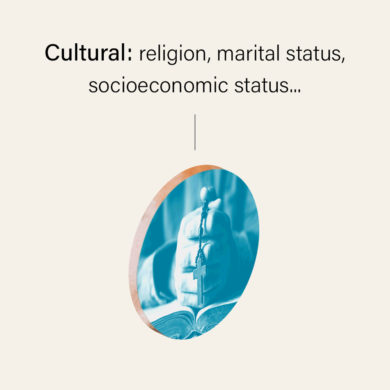 What Is Cultural Unconscious Bias?