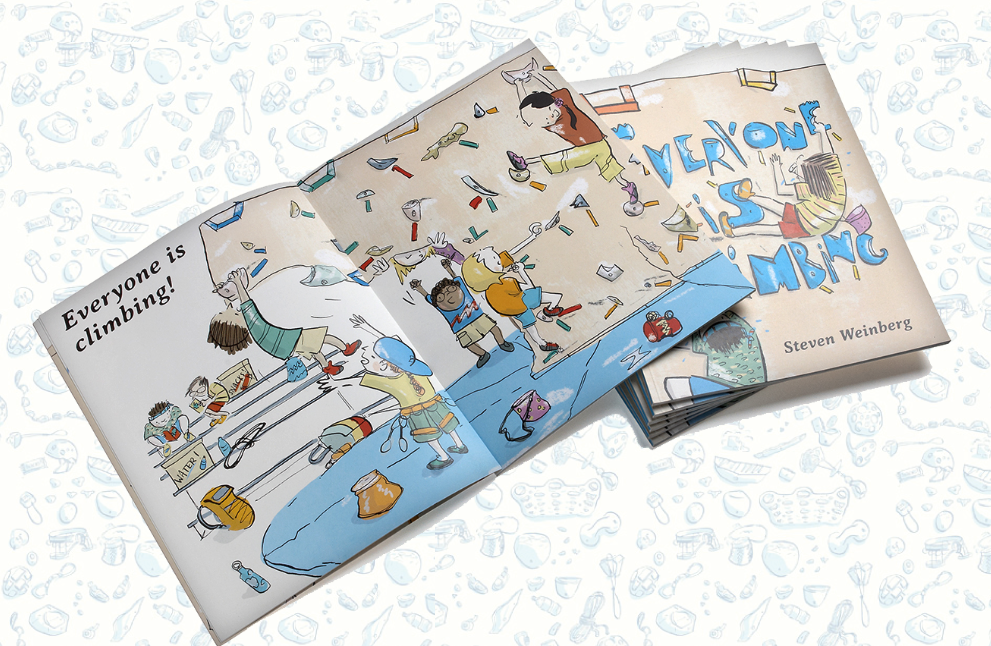 Parents, and especially moms, are a notoriously difficult group to target in marketing. Recommendations for activities like rock climbing can be spread through referrals; however, without top-of-mind awareness, these sorts of “whisper campaigns” tend to lead to slow growth. Brooklyn Boulders needed a way to encourage parents to bring their young kids to the climbing gym not just for birthdays or special events, but as an introduction to a new lifestyle. Young gym members could receive lessons and participate in a regular activity that provides exercise, community, stimulation, and personal growth.

Having worked with Brooklyn Boulders in past PR and marketing campaigns, Consciously was brought on for this special mission of reaching parents of young children. We determined that the best way to get folks interested was not with a group of messages but, rather, a story. Consciously partnered with Brooklyn Boulders and New York-based writer/illustrator Steven Weinberg to produce a delightful children’s book. The book explained everything any parent or child would need to know about climbing, including why it’s an excellent way to become a more physically active and mentally centered version of yourself.

Membership and participation of young climbers under 12 had stayed largely stagnant at Brooklyn Boulders locations for several years. The Brooklyn Boulders leadership team set a goal to engage parents of young children and to foster the idea that rock climbing can be the it activity to keep their child healthy, active, and in a like-minded community.
The major challenge presented was that reaching parents, especially mothers, with targeted marketing appeals can be incredibly difficult. These demographics are resistant to messaging that seeks to influence their choices and make accommodations within their busy schedule. While the seeds of an idea like “maybe your kid should try rock climbing!” can be planted with a well-placed message, parents truly have to feel invested in an idea before they are willing to commit. Investments don’t come easy, either. Parents must not only have some form of proof that the activity will provide the promised benefits, but they must also feel like they fully understand what they are getting themselves into.

Consciously determined that the best way to reach the coveted demographic would be to tell a compelling story that would be hard to pass by. We wanted parents to know the full experience of rock climbing: what it involves, why it’s popular, and why your kid will no doubt fall in love with it. Part of the beauty of rock climbing is that it isn’t just a one-person sport. It’s a community, where people talk about their accomplishments, offer tips on “beta”, and generally just catch up with one another from the bench. Getting kids involved in this community promised high levels of continual value to families and the children themselves. Once you’re hooked, it’s hard to stop coming back!

To give parents and children their first taste, Consciously partnered with Brooklyn Boulders and children’s author/illustrator Steven Weinberg to create a colorful and informative storybook. The book could engage young children with colorful illustrations and information while informing parents as to why so many people were getting into the growing sport (now featured in the Summer Olympics).

“A primary goal was to give parents something to get excited about, something we could put in their hands,” explains Consciously founder Rai-mon Nemar Barnes. “Instead of just yelling something into the void, we were creating something that people would be interested in reading.”

The launch of the book itself provided a solid platform for community engagement, outreach, and education. Consciously provided event activation, helping plan and promote a book launch event capable of getting parents excited and in the gym. The book launch event included children’s activities, introductory climbing clinics, and a read-aloud of the finished product. Materials created from the event were used to further promote the gym and provide important forms of social proof to convince young parents that, yes, their kids could be having a blast.

One standout component to this campaign was the interlocking interests of everyone involved: all of the stakeholders. Rock climbing is a particularly good sport for kids because it builds coordination and muscle development while also improving their mental health. Parents benefit from having a kid in climbing because they’re involved in something; they’re building social and cognitive skills; and they’re becoming a part of a bigger community. Other climbers benefit from the revenues and interest brought into their gyms, and of course the client benefits from boosted revenues coming from an under-represented demographic. Also, an upstart children’s book creator got a great gig to fuel their career.

“Everything met together at that ‘zen’ pareto efficiency point within this campaign, which is part of why we remember it so fondly,” Rai-mon reflects. “Also, at the end of the day, once the marketing cycle had wrapped up, we still had this ultra-cool ‘thing’ we could point to that we made, which was this delightful children’s book that I still keep in my work materials to this day.”